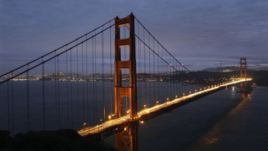 The Golden Gate Bridge is celebrating its seventy-fifth anniversary.

The bridge opened to vehicle traffic on May twenty-eighth, nineteen thirty-seven.

Since then, more than two billion vehicles have crossed the world famous structure between San Francisco and Marin County, California. As many as one hundred twelve thousand cars make the trip each day.

The Golden Gate Bridge had the longest suspension span in the world, at the time it was built.

Today it still rates among the top ten longest bridge spans in existence.

She says the bridge is one of the most extraordinary engineering projects of all time.

It's also a place where things happen first. For example, we were the first suspension bridge to have to change the roadway deck."

That narrow passage of water connects the San Francisco Bay to the Pacific Ocean.

The bridge is two thousand seven hundred eighty-eight meters long from one end to the other.

It is twenty-seven meters wide. Two large cables pass over the top of the bridge's towers. These structures stand two hundred twenty seven meters above water and one hundred fifty two meters above the road.

This is part of what enables the bridge to move up and down by nearly five meters.

The Navy wanted the bridge painted in yellow and black. The Air Force had suggested red and white.

MARY CURRIE: "But we were fortunate that Irving Morrow knew that that color would blend with the environment, it would contrast with the ocean and the air above, and it would also allow the art deco styling to really stand out."