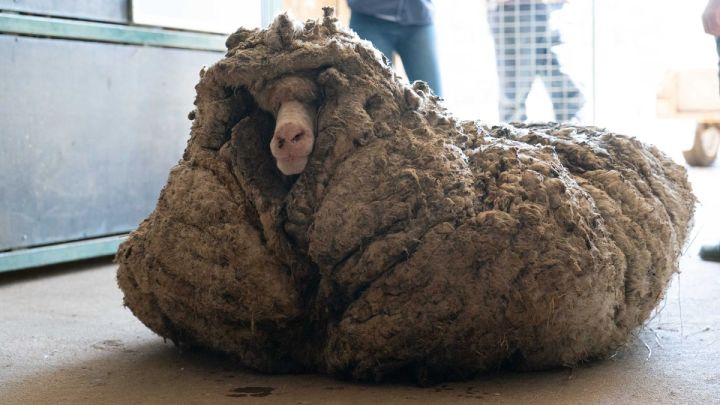 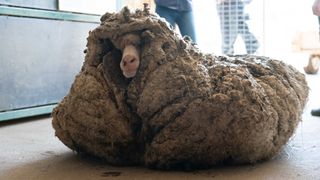 Months of social distancing to slow the spread of COVID-19 have kept many people from getting regular haircuts. But even the most overgrown stay-at-home hair can't compare with the plight of a merino sheep in Australia wearing a whopping 78 lbs. (35 kilograms) of overgrown, matted fleece.

Domesticated sheep usually undergo annual shearings to keep their coats in check. However, this particular ram, nicknamed Baarack, was roaming wild in a state forest in Victoria, Australia. He hadn't been shorn in years, and his fleece had grown into a dense, gargantuan mass by the time he was captured and brought to Edgar's Mission Farm Sanctuary for rescued farm animals in Lancefield, Victoria, a representative of the nonprofit told Live Science in an email.

There, Baarack was finally shorn of his heavy, woolly burden, which weighed about as much as a 10-year-old child. Under the pounds of matted wool — stained with dirt, studded with twigs and crawling with insects — "was not Australia's answer to the yeti, but a sheep," Edgar's Mission wrote on Facebook on Feb. 10.

At one point in the past, Baarack had an owner, as he had been castrated and mulesed — a practice that removes skin from around a sheep's tail, creating smooth scar tissue that deters blowflies, according to Australia's Royal Society for the Prevention of Cruelty to Animals (RSPCA). His ears also showed signs of tagging, though the tags were long gone, possibly torn out by the weight of his overgrown coat, according to Edgar's Mission.

Photos of Baarack before his haircut show the sheep's muzzle poking out of an enormous and very crusty wool cocoon. When the sheep was standing, only his hooves and a small section of his lower legs were visible; when he lay down, his legs disappeared entirely.

The load of wool around his head was so heavy that it partly hid his face, and the fleece's weight pulled on his lower eyelids, exposing his eyes to grit and dust. He had a painful ulcer in one eye from a stuck grass seed, according to the mission representative.

Evidence from mitochondrial DNA — which comes from a separate genome inside mitochondria, or energy-making cells — in wild and modern sheep indicates that domesticated sheep are descended from the mouflon (Ovis orientalis), and their domestication began around 11,000 years ago in the Fertile Crescent, researchers reported in 2018 in the Eurasian Journal of Applied Biotechnology. Over thousands of years, sheep were selectively bred to produce wool for human use, and domesticated sheep no longer shed their coats seasonally, as their wild relatives do.

Left unshorn, their woolly coats continue to grow. Overgrown coats create health hazards for the sheep, making them prone to injury and infections, and hampering the animals' ability to regulate their body temperature, according to North Dakota State University.

In 2015, an overgrown merino sheep named Chris (also in Australia) set a record for having the most wool removed in one shearing, shedding more than 90 lbs. (41 kg) of matted fleece, Live Science previously reported. RSPCA staff rescued Chris from the wild; they estimated that Chris hadn't been shorn in at least five years.

The amount of wool removed from Baarack would be enough to knit about 61 sweaters or 490 pairs of men's socks, The Guardian reported on Feb. 24.

Now that the beleaguered Baarack doesn't have to peer through a curtain of matted, crusty fleece, his future definitely looks a lot brighter. And with rescue workers at Edgar's Mission nursing the underweight sheep back to health, all's wool that ends wool.