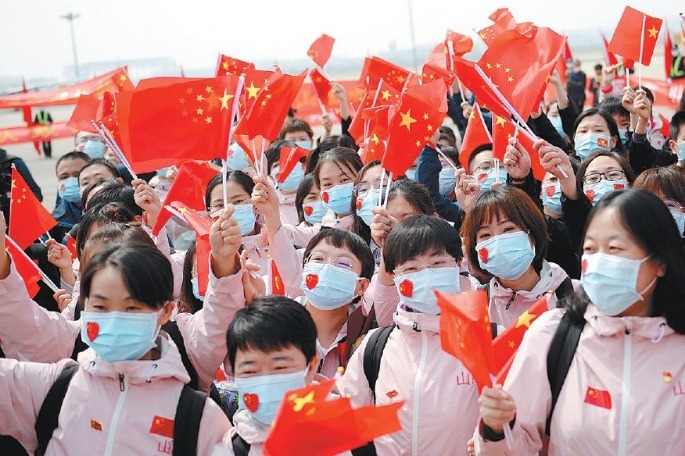 Two airplanes carrying 323 medical workers from Shanxi landed at Taiyuan Wusu International Airport on March 31, after completing their mission to Hubei province to treat those affected by the novel coronavirus epidemic.

The returnees were welcomed by Lou Yangsheng, Party secretary of Shanxi, Governor Lin Wu and other officials and local residents.

All 1,516 Shanxi medical workers who had worked in Hubei for about two months have returned to their home province.

Accompanying them were 11 journalists from the province, who had been reporting the fight against the epidemic during the past two months.

Since Jan 26, Shanxi dispatched 13 medical teams, with members from 189 medical institutions, to Hubei province, the center of the epidemic.

They worked in 16 hospitals in the cities of Wuhan, Xiantao, Tianmen and Qianjiang. They treated 3,527 patients, with a recovery rate of more than 95 percent, according to reports in Shanxi's media.

They also carried out 18,000 nuleic acid tests and 3,377 CT scans, and trained more than 6,200 local medical workers. During the two months, no cases of infection were reported among the medics.

"The facts and numbers demonstrate the sense of responsibility, the excellent skills, the effective protective measures and the high morale of the medical workers from Shanxi," said a commentary in Shanxi Daily.

With the news of the Shanxi medics' departure, residents in various cities lined the roads from their hotels to Wuhan Tianhe International Airport, to send off the heroes who had safeguarded their lives and health for more than two months.

In Qianjiang, Li Xuanyi, a first-grade student sent a painting to the medical workers.

In the painting, the medics were depicted as "angels in white".

"Farewell, my angels. Thank you for your painstaking efforts to save our lives," Li said.

Hou Ruigang, leader of the medical team in Qianjiang, said the city has left an unforgettable impression on him.

"The 66 days in Qianjiang have made the city a home away from home for me. I'll pay close attention to Qianjiang's development in the years to come," Hou said.

Qianjiang's authorities had asked the Shanxi medics to leave their protective garments, with the signatures of all the team members. The garments will be collected and displayed at the Qianjiang Museum, showing the respect and gratitude of the locals.

In the lines sending off the medics, were people from all walks of life and age groups, including local medical workers, senior citizens, school children, construction workers and company employees.

They waved posters with grateful words and sang songs of gratitude.

Those who were required to stay at home waved from their balconies and windows.

Liu Chuange, head of the publicity department of Qiaokou district in Wuhan, said the two-month experience had forged a "lifelong friendship between the people of Shanxi and Wuhan".

"We hope you can visit Wuhan again in the future, not for medical work, but for the blossoming sakura flowers and the delicious hot dry noodles," Liu said.

"We welcome you to Wuhan where everybody is your friend and relative," the official said.

Guo Yanjie contributed to this story.